Luke Shaw was named in PFA 's Team of The Year award, while it was a fitting honor after a fine season, does that mean he should start over the more established Leighton Baines? Let's examine the case.

Share All sharing options for: Should Luke Shaw start over Leighton Baines?

At the PFA's awards ceremony last night, the Professional Footballers' Association named their Premier League Team of the Year. Among the 11 names was Southampton's young left-back, Luke Shaw (teammate Adam Lallana was also named in the squad) who has enjoyed a meteoric rise ever since making his Southampton debut at the tender age of 16 three years ago. Such was the rise of Shaw, that he is now being fast-tracked to a possible World Cup spot with England despite the presence of Ashley Cole, who has been arguably England's best left back for the past ten years.

This may be seen by some as a snub towards Leighton Baines, who has put up fine performances over the years and has now cemented his place in the England national team. But should this latest accolade force Roy Hodgson not only to hand a spot in the plane for Luke Shaw, but to even give him a starting berth in the World Cup? Let's take a closer look.

A defender's job is basically to defend, so let's see how these two left back stacked up in defense: 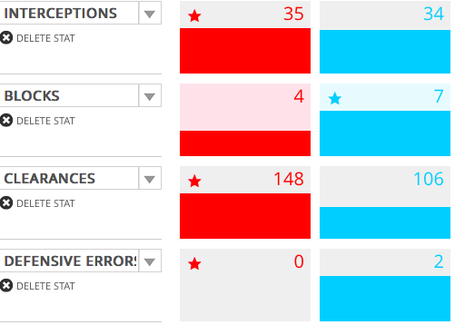 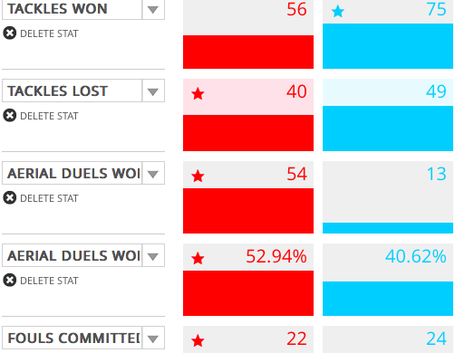 As we can see from the graphic above, both defenders are basically neck and neck in terms of their defensive ability. Shaw have the advantage in clearances, signaling his alertness in snuffing out danger. On the other hand, Baines has nearly twice the amount of blocks, an indication of his excellent positioning when opposing attackers bore down on Everton's defense. There is a concern however with Baines committing two defensive errors, with both errors leading to goal attempts. In a high stake World Cup game, this is something England could not afford. Another particular area where Shaw is stronger is in aerial duels, where he won almost 53% of aerial duels compared to Baines who only won almost 41% of his aerial duels. Baines though, won more tackles than Shaw, and on average won 2.5 tackle per game compared to Shaw's 1.71 tackles won per game.

The verdict: Tie. Shaw is stronger in terms of clearances and snuffing out danger, and is also strong in aerial duels. Baines however had the edge in winning tackles and blocking shots. It's difficult to separate either one of them defensively, with one having clear advantage over the other in some areas and vice versa.

A modern full-back must also be equally adept in the attacking side of games, with many full-backs nowadays making bombarding runs and providing crosses, let's see how these two stacked up on offense: 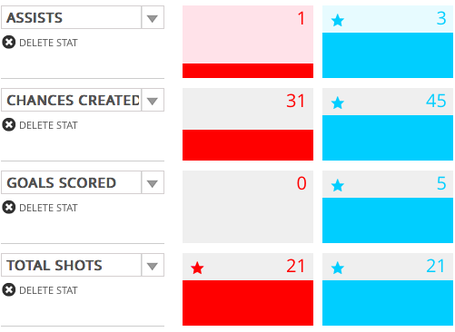 Over the years, Baines has been known for his contribution on the offensive side of the game. The graphic above speaks for itself, with Baines having scored 5 goals compared to Shaw who has not scored any in the league. Furthermore, Baines have another useful quality in offense, which is his set-piece ability. From his 5 goals, 2 of those was scored from free-kick situation, and an additional 3 from the penalty spot. In fact, Baines is one of Premier League's best penalty taker, having converted 12 of his penalty attempts. Baines also created more chances and provided more assists than Shaw. Shaw deserves some credit with the accuracy of his shots, with 67% of his shot on target. While, Baines is the opposite with a 33% accuracy.

The verdict: Baines. A clear advantage for Baines here, his dead ball ability will be useful and could be a weapon for England in the World Cup. In the dreaded penalty shoot-out, the sight of Baines stepping up to the spot should be a calming sight for England fans.

Finally, you would also want your defender to be comfortable on the ball and able to keep the ball moving, let's see how they stacked up in possession stats: 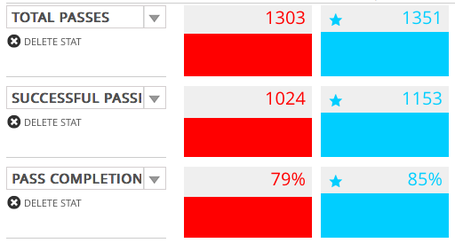 As we can see above, Baines is more successful with his 85% pass completion rate compared to Shaw's 79%, while also attempting more passes. However the good thing about both players are the fact that they are playing under a manager that emphasize possession football. Under Mauricio Pochettino, Southampton's average possession is 55%, while Roberto Martinez's Everton average possession is 53%.

The verdict: Baines. Once again Baines comes out on top over Shaw, with him being comfortable on the ball and is more successful with his passes.

Its obvious that Shaw oozes talent and potential, and being rewarded with a Team of The Year spot from his fellow peers would only be the beginning of a successful career. However at the moment, Baines has the upper hand offensively and when in possession of the ball. Shaw on the other hand, is equal with Baines defensively (if not slightly better), a definite testament to his talent despite his young age. At the moment, Hodgson should stick with the seasoned veteran Baines, but its good to know that Baines successor on left-back is already here.

What do you think England fans? Should Roy Hodgson stick with the experienced Baines? Or should he go with the highly ratedShaw? Vote and have your say in the comments below!