England take on Italy on their World Cup opener, how did the Three Lions fare?

Share All sharing options for: England vs Italy: Match Recap

The build-up to England vs Italy has been dominated by England's plethora of young, attacking talent, and how Roy Hodgson should unleash these youngsters from the get-go against Italy (you might also add the heat and humidity, as well as the state of the Arena Amazonia pitch into the discussion surrounding the build-up). Hodgson did unleash one of England's exciting young star in Raheem Sterling, and on a night where the final score was not to England's preference, Sterling did give a glimpse of his potential.

The start of the match was a bit of a cagey affair, Italy dominated the possession (which they did throughout the match), but England didn't do too badly either, Sterling had an effort off target as early as the 4th minute (which to someone who just woke up from a 7-hour sleep, thought was a goal). Henderson also had an attempt blocked by Salvatore Sirigu, standing in for the injured Gianluigi Buffon.

The two team traded shots, but it was Italy who eventually took the lead through Claudio Marchisio, who hit a long-range effort that tucks in to Joe Hart's bottom corner. A case could be made that England players should've been quicker in closing out Marchisio, who had time and space to unleash his shot.

The lead was shot lived, as England strikes back three minutes later. Wayne Rooney broke free through the left-hand side, he then delivers a low cross that was followed by a right footed finish which left Sirigu with no chance.

Italy nearly took the lead again, Balotelli who was very quiet throughout the first half, lobbed an effort towards goal after Joe Hart has commit himself, but Jagielka managed to clear it at the line. Both sides went into the dugout with the score all-square at 1-1.

The second half did not start well for England, just five minutes in, Antonio Candreva delivers a cross from England's left hand side (, and Mario Balotelli finishes with a superb header in the far post. It was a common theme for Italy, as they had eight crosses (all from the same side), although only one of them was successful.

Rooney could've brought England level in the 62nd minute, after receiving a pass from Leighton Baines, he cuts inside get himself balanced but his shot was wide and off target. The introduction of Ross Barkley for Danny Welbeck brought an instant impact, Barkley testing Italy's defense in the 64th minute that was on target. England though had to resort from efforts from outside the box. 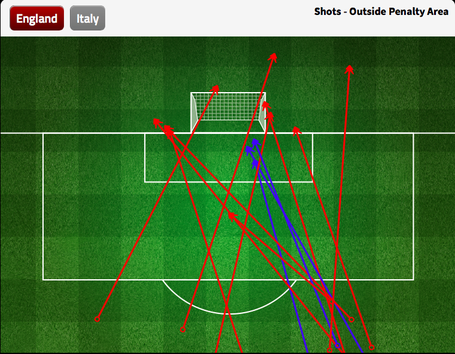 In the last 10 minutes, England was dominating the match and had all the attacking initiative, Italy defends well though, Gerrard had a free kick near the edge of Italy's penalty box, but his effort was high and over the bar. With five minutes of added on time, Italy break with Ciro Immobile who replaces Balotelli, but as he bears down on England's defense, Cahill stopped him. Italy had the last best chance of the game, Pirlo struck a free kick that hit the post, with Hart already stranded. The final whistle blow soon after, and England had a losing start to their World Cup campaign. 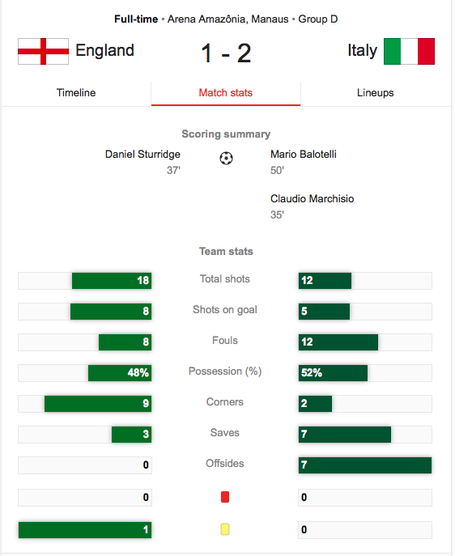 England's Man of The Match

Raheem Sterling. Throughout the game he looked positive by driving to Italy's defense trying to make something happen, was full of confidence and trickery. If he can improve on his final ball and finishing on the final third (something that can be said to all of England's frontline), there's no reason for England not to take maximum points in the next two game.