Do You Know The Enemy? - Andrea Pirlo

England's first match of the World Cup against Italy is just days away. But, how can you beat the enemy if you have no clue who they are? Here's an over view of Italy's most important player - Andrea Pirlo.

Share All sharing options for: Do You Know The Enemy? - Andrea Pirlo

Just by looking at him, you can tell that Andrea Pirlo is a Renaissance artist. He belongs beside such names as Michelangelo, Donatello, Raphael, and Leonardo as a fifth ninja turtle. However, the Italian does not sculpt (that I know of) or use a canvas. Instead, he paints his masterpiece on the football pitch. With him pulling the strings, Italy has the potential to be among the world's best. Without him, they are a static mess.

Italy have had the most convoluted set of consecutive world cups prior to this week's kick off. In 2006, the Italians were a defensive titan, letting in only two goals, while their counterattacks carried them to a fourth title. In 2010, the Italians looked completely lost and failed to win a single match on their way to crashing out of the group stage. What was the difference between the triumphant 2006 Italian squad and the 2010 Italian mess? In 2006, Pirlo was orchestrating fantastic counter-attacks to great success. In 2010, the Italian team was playing  a lazy game- as if they did not care about winning- until Pirlo finally came off the bench in the last game against Slovakia, when it was too late. The Azzurri have certainly learned their lesson. Since the 2010 World Cup, Italy have transformed themselves back into something of a European power. They've cruised through qualifying for the World Cup and European Championships. They made it to the final of the 2012 Euros, navigating through a challenging tricky path through the likes of England and Germany. While they may have suffered a heavy defeat at the hands of Spain in the finals, they did draw (and arguably outplay) the Spaniards in their group. Pirlo has been there all along the way, playing every single minute of the Euros and scoring one goal.

What exactly does Pirlo do? He is the glue of the Italian side. As you can see from this image from 4-4-2's Stat Zone picturing the average positioning of the Juventus players against Second place Roma, Pirlo is at the very center of the play. 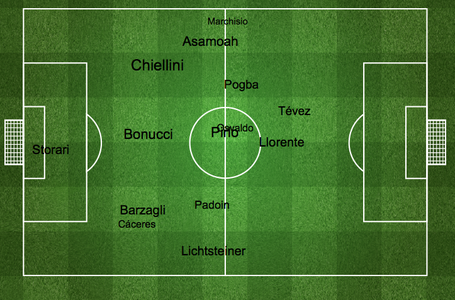 With the Italian national team, you can expect something similar. Pirlo, while taking a deep position, makes himself absolutely vital in recycling possession and starting attacks. With Juventus, he had average of 2.3 key passes per game. He happens also to be a bit of a dead-eye when it comes to passing over distance and set pieces. Most (if not all) of Pirlo's goals in the past year have come from free kicks, including a sublime finish in the Confederation's Cup, last year. During the run of play, he is able to pinpoint his teammates across the field, completing an astounding 9.6 long balls per game. However, Pirlo is not a defensive player, despite playing deep in the midfield. He makes only makes a small handful of tackles and interceptions per game. This has meant being paired with a more defensive partner at Juventus. You can expect something similar with the Italian national team. However, it might not be a midfield partner that provides defensive cover. The Italians are tactically flexible, able to switch formations and maintain both defensive integrity and attacking verve. In the Euros, the Italians were able to field a line up with Pirlo as the deepest midfielder, with the team compensating for their midfield maestro.

How will the English shut Pirlo down? There are two options. Either actively pressure Pirlo to prevent him from getting on the ball or making a pass. Or, you can shut down the options Pirlo has to pass to. Marking Pirlo is problematic since he plays so deep. One of the forwards or attacking midfielders would have to be assigned him, but the Italian is so good, he may be able to easily evade the likes of Rooney. Marking the passing options is much more difficult to do, but England's defense is probably it's strong point. In any case, the English were able to hold the Italians scoreless at the Euros.