With the news coming from Manchester that 25-year-old Chris Smalling is signed to a new contract, the question can then be asked about the rest of England's finest 25-and-under group, who else is impressing there clubs? Who are the young players that the FA will build a team around for World Cups to come?

I remember the days when Jacky Wilshere was tearing up headlines as the next big thing in English football. But for the past couple of years, the 23-year-old is hardly making a splash in the Arsenal camp that is dominated by headlines about Olivier Giroud. Even the likes of Phil Jones, the still very young English international, is on the chopping block at his Manchester United Squad. As Smalling signs a new contract, for now Jones is in the dark; and for good reason. Jones has been an unreliable defender at United all season. Does he show flashes of that potential greatness that got him signed in the first place? Of course he does. But does he make a lot more mistakes than good plays? Yes, giving David De Gea the chance to be the superstar that he is now..

Looking ahead, with Joe Hart ageing and losing his reaction times that he had in his mid-20s, who is the next English goalkeeper? The best young goalkeepers in the world are not English. Currently, Belgium Courtios of Chelsea and Spanish De Gea of United are the most discussed young goalkeepers, showing promise for their countries. Leaving England with who to rely on in the future? Ben Amos or Jack Butland? Sure, both are somewhat exciting prospects, but neither have that feeling of established dominance in the goal that makes the rest of the team feel comfortable.

All of this is pointing to a disappointing future for the Three Lions. But this may not be the case. The likes of Harry Kane and Danny Ings are showing that some of the best up and coming strikers are English, which is going to make a dangerous attack. Add in Raheem Sterling (or Danny Welbeck or Daniel Sturridge), and that is a very dangerous front 3, that could score enough goals to have England win, even with Phil Jones playing defense. In the midfield, Jordan Henderson is still only 25-years old and has a great defensive mind in such open space. Tom Cleverly is playing better while at loan at Aston Villa. Tom Carroll is another player that is on the rise, and although he is not a top tier player, he has so much potential to be a great international player for England. Lastly, as Luke Shaw develops his skills, the left side of the England back half will be secure for years to come. Yes, he is a little naive still, but he will learn, and with time, he will be a great England defender. 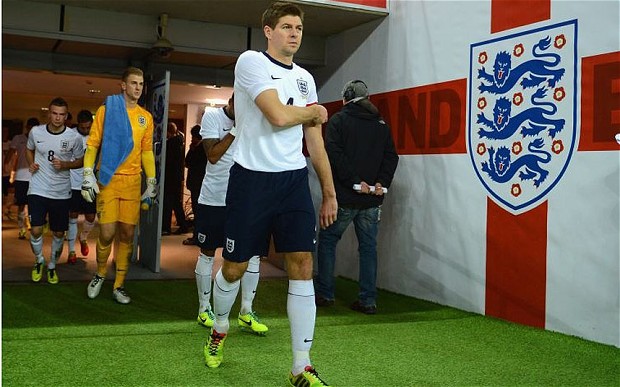 The days of Gerrard are long gone, and Joe Hart's time is coming to a close.

The point is that England, like every nation, will go through the growing pains of replacing the old established veterans, and bringing in the new players. However, England is looking a lot better for the future than countries like Germany and Spain (whose golden generations are past their peaks). However, countries like Belgium and Italy have much more to look forward to. But, a lot can change and players can develop by the time the 2016 UEFA Euro tournament rolls around. Heck, by the time the 2018 World Cup is here, this whole article could be way off. However, as it sits right now, England is in a good position to maintain its position toward the top of the FIFA rankings. It just may not be #1 for quite sometime.