Should England Switch to a 3-5-2 System?

David Wyatt offered an interesting suggestion for England to try and improve a few weeks back. However, I disagree a bit on whether the proposed 3-5-2 formation would be of best interest to the national team. My case boils down to one argument: fullbacks.

Share All sharing options for: Should England Switch to a 3-5-2 System?

David made the argument that, in order to make the best out of both Daniel Sturridge and Wayne Rooney, without compromising the distribution from midfield, the English national team could switch to a 3-5-2 formation. I would actually agree that such a formation would have it's merits. It might just be able to improve the team. However, while I think it is intriguing and certainly a possibility, I do not believe that, specifically, switching to a back 3 would be the best use of England's resources. And that comes down to one thing: fullbacks.

If you look around the world, fullback is consistently a problem position, especially on the left. I live in the United States. The US national team has consistently had problems with left back for the past 4 world cup cycles. In the most recent World Cup, the starting left back was a 32 year old winger. You look at Germany, who would the whole thing, they played most of the World Cup with center backs playing as the fullbacks, at least until Low realized how stupid playing Phillip Lahm out of position was.

England, on the other hand, has a natural abundance of fullbacks on both sides. Not only that, but many of these players are among the best in the world. To boot, England has a number of young fullbacks that will have the opportunity to prove themselves at the Premier League level, and then, the International stage. Here's a list of English players in the Premier League that have a shot at playing fullback for England, now or in the future (in no particular order). Players with an * went to the 2014 World Cup.

With 15 names, that's quite a list. Now, some of those players, like Calum Chambers and John Stones will primarily be central players, but the point still stands. England has a lot of options to choose from. In contrast, Germany used one natural fullback in the entirety of the 2014 World Cup. With so many potential options, and good options at that, I feel that these players should be utilized in the best way possible, in large part, because they are so much better than most of the players in those positions on other national teams. The national teams that will need to be beaten if England hopes to make a significant run at the Euros and World Cup. If you have the fullbacks on England matched up against the fullbacks on the other team on a level playing field, England will win that portion of the pitch, specifically, out wide. And that's fantastic for a national team that has struggled to compete in the middle of the field. If used wisely, the fullbacks could give England a huge edge. Now the question is, would it be better for these fullbacks to play in a 3-5-2 or with a convention back line?

This is a 3-5-2. In the formation, there are neither fullbacks, nor wingers. Instead, there is a fusion of the two into what is known as a wingback (LWB, RWB). Wingbacks represent the only width on the field and are supposed to, in the defensive third, fallback to cover the wide areas, keep wide to stretch the opposition and allow for possession in the midfield, and to ping in crosses in the final third. It is hugely important that wingbacks be extremely mobile because they must cover basically the entirety of the pitch. Because wingbacks are so important in both attacking and defending, and because so few clubs actually play with them, fullbacks usually take on the role of wingback. 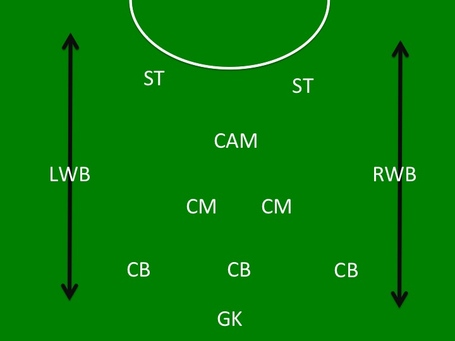 This is a 4-2-3-1. I figured it was the closest analog to the 3-5-2. The midfield is completely unchanged from the 3-5-2. The wingbacks move forward to become wingers, while one striker is replaced by a fullback and a center back shifts to cover the other fullback. When defending, fullbacks in a 4-2-3-1 fall back into an organized bank of 4. When attacking, one fullback pushes up to the winger in an overlap. This allows the winger to tuck inside and present both a wide and central attacking option. While the fullback has mode forward, the centerbacks tuck to the side to cover the gap. The other fullback tucks in and acts as a center back during the attack. Alternatively, both fullbacks can push up if a defensive midfielder drops between the centerbacks. 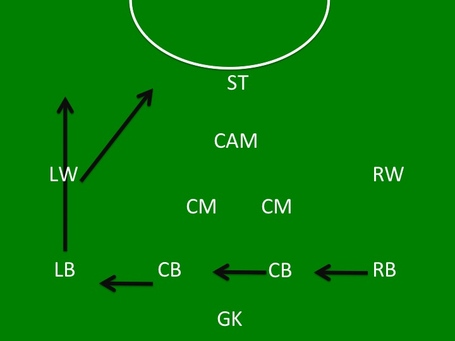 Those are the formations. Now, which one's better for fullbacks?

Most of the teams around the world employ a back four, which means that England will come across teams with both wingers and fullbacks. If the squad is playing with wingbacks, then those players are going to be outnumbered in the wide areas. That part of the pitch will basically be ceded to the opposition in the hopes of pushing through the middle. If the team plays with a back 4, the fullbacks will push up and create a 2 vs. 2 situation against the opposition. Here, quality wins. If England has superior talent in these spots, then they win that area of the pitch. I think England's wingers, when healthy are pretty good. Theo Walcott, Alex Oxlade Chamberlain, Daniel Sturridge, Andros Townsend, Aaron Lennon, and Raheem Sterling all represent significant attacking threats from the wings. They will all be available for the next World Cup cycle, at the least. Combine that with the great fullback quality, and you get a situation where England has a great chance to win that area of the pitch.

I think the World Cup represented a great example of how England lack strength in the middle, but are stupendous out wide. Against Italy, Raheem Sterling and Daniel Sturridge absolutely terrorized the Italians down the flank. The goal came through the wide areas. But against Uruguay, when England held possession, the midfield was constantly under pressure from the opposition's central players. Uruguay were able to pressure Henderson and Gerrard to prevent attacking passes and set the centerbacks on the back foot. Now, in both matches, England played with fullbacks. However, Baines and Johnson were uncharacteristically poor during the World Cup. If the fullbacks can perform, and, since they do week in-week out in the Premier League, they should, than England ought to be able to utilize their quality to strike down the wing and generate chances.

Of course, this is one thought. What do you think? Do you think the benefits of strengthening in the middle outweigh the wide areas? Do you think fullbacks are not significant enough to be such a focal point of the team? Discuss!