England vs Italy - Everything You Need To Know

We have everything you could need to know about Englands opening World Cup Group D against Italy right here. What TV channel to watch the game on, the weather, forecast, betting odds and much more.

Share All sharing options for: England vs Italy - Everything You Need To Know

We're not going to lie, we are very excited that the World Cup has finally arrived and we get to see Englands new crop of talented youngsters compete in a competitive tournament. Our first game against the Italians is as tough as it gets but we are all geared up for a cracking month of top football.

We have put together all of the key info you could want ahead of Englands World Cup opening group D game on Saturday night. Read our full guide and be the most informed person watching the game on Saturday evening.

The single most important thing to remember. The game was originally scheduled for 2am on the Sunday morning but we all decided that it was a little too late so brought it forward to set up a brilliant Saturday night for us fans.

Gary Lineker and his happy band of pundits prepare us for Englands opening game. Whether you like them or not they are only on for 40 minutes and we are likely to be far too excited to be listening anyway.

This 44,500 all seater stadium has been built in-time (just) for this years World Cup. Located in the heart of the Amazon rainforest this venue is the furthest West of all the host cities. Labelled as the one all managers wanted to avoid when the draw was made it was somewhat inevitable that England would be playing their first game there.

Located 1,731 miles from Englands Rio base it is quite a journey for the squad but something we shouldn't dwell on. Unless the players flying on a cramped twin-propeller plane (they're not) then a short flight is nothing to worry about. Nacional FC will be playing their home games here going forward if you want to drop some extra stats on your mates before kick off. 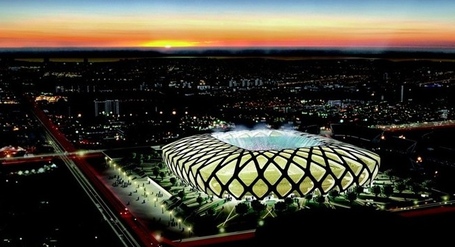 Quite a contrast in results from both sides with Italy's Ciro Immobile bagging a hat-trick and England failing to score against 10 men. We aren't going to read too much into these results, but, it would have been nice to go into the opening game on the back of a goal scoring performance..... Like the Italians have done. Moving on.

We could write a post on this subject entirely on its own but we'll try and keep it short and to the point.

The only injury doubt for England is Alex Oxlade-Chamberlain. Roy has come out and publicly announced that our prized winger will make the tournament but whether he will feature in the opening game is unconfirmed. Sterling could sneak into the starting eleven ahead of Danny Welbeck but we anticipate Roy will want someone who tracks back a little more than the impressive Liverpool youngster.

Italy are with out Montolivo who broke his leg against the Republic of Ireland last week. The only headache they have now is whether to include hat-trick hero Immobile in the starting eleven. We will also get to see the brilliant and unpredictable Mario Balotelli lead the line.

The bookmakers are siding with the Italians to win the match with them priced at 6/4 for the win and England out at 2/1. I think we will see a tighter game than the odds suggest and with the draw priced at 2/1 we can't see past a 1-1 outcome.

The weather is going to be hot and very humid. The stadium is in the Amazon rainforest in South America so the weather is fairly consistent. It's hot - deal with it and move on.

So there we have it. All of the key info you need to watch the three lions take on Italy on Saturday evening. Don't forget to join us for the discussion on the game on our game thread post which will be live around 45 minutes before kick off. Come on England!