The Premier League and the Dearth of English Goalkeepers

There currently aren't all that many options between the sticks for the English national team. Here's a review of who is getting the games in England's top flight and comparing that to other leagues.

Share All sharing options for: The Premier League and the Dearth of English Goalkeepers

It appears that England are a bit short on options when it comes to goalkeepers. There appear to only be four options, with Joe Hart taking the starter's role. Behind him are Ben Foster of West Brom, Fraser Forester of Celtic, and John Ruddy of Norwich. Not exactly the most convincing of names there. When I think of England and goalkeeping, I think of the likes of Gordon Banks and David Seaman, exemplary and renowned goalkeepers. Hart is fairly easily the best of the four, but even he doesn't inspire a ton of confidence. There's also an issue of a lack of an heir-apparent. Except for Forester (31), each of these players are 26-27. While that might be good for now, with all 4 in their theoretical physical prime for several more years to come, it brings up the dilemma of who comes next. In contrast, I can find quite a few capable keepers for the likes of Italy, Spain, Germany, and even the United States. So what happened? What is causing this issue? I don't know if we'll be able to figure exactly what the problem is, nor do I know of a solution, but we can at least take a look at what's happening in the Premier League to get a few ideas.

I decided to breakdown the nationalities of all the starting goalkeepers for the 20 Premier League teams. Using WhoScored, I recorded the nationalities of the players with the most appearances for each team. (In the case of West Ham, where two goalkeepers were tied, I chose the keeper that most recently played.) Why did I chose to look at the data this way? Well, goalkeepers rarely need substitutions and rarely get injured. It is entirely common to see a keeper play over 90% of the league fixture. Further, it's often stated that the best way for goalkeepers to improve is to get consistent time playing at a high level. That means that there is often a considerable gap between the starting keeper and the second and third string. It wouldn't be surprising to hear that a second goalkeeper started absolutely no games in a whole season. Of course, with the national team, you need players who are consistently, not only playing, but playing well. Therefore, goalkeepers who are not playing can be discounted from immediate analysis. 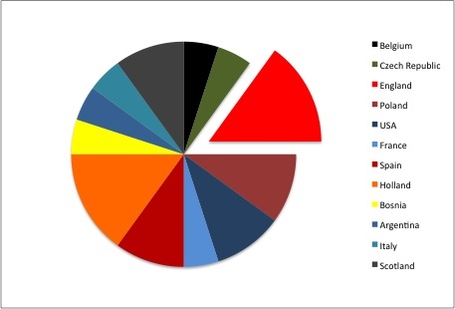 This chart shows the relative percentages of representation among the nationalities in England's top flight. England, of course, is in red and separated for easy viewing. Notice, while England has the largest slice (tied with Holland), it certainly doesn't dominate the chart. In fact, England represents a mere 15% (3 players) of the total represented nationalities. Instead, the Premier League wields a tremendous diversity of goalkeepers from three different continents. No nationality comes close to dominating, nor does it seem like there is much of a preference for traditionally strong soccer nations. The likes of the Czech Republic, Scotland, and Poland won't even be represented in the World Cup this year, though they make up a whopping 25% of the whole league's starting keepers.

Looking at that chart, you have to wonder, why does England make up such a small percentage? Why do only 3 teams play an English keeper? And is that normal in a league? To compare, I collected similar data from Italy's Serie A, Spain's La Liga, Germany's Bundesliga, and the United States' MLS (because I'm American, so, bias). Italy was the closest match to the Premier League, but it's still very different. 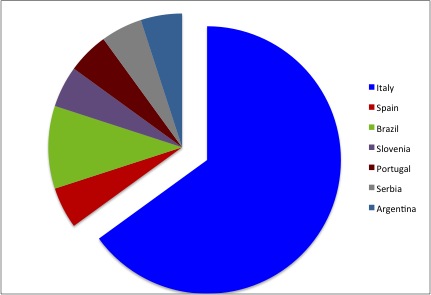 Over in Italy's Serie A, 65% of the teams play an Italian keeper (13 teams). Seven nationalities are represented, but only one has even two players in the league (Brazil). And keep in mind, Italy was the most like England. Spain, MLS, and Germany each had more representation by the home country and less diversity, each more-so than the previous. This suggests that England is entirely an outlier. Something is happening in the Premier League that is entirely different. Perhaps England is not producing goalkeepers and, instead, buying them. There are quite a few names that fit that description- Howard, Guzan, De Gea, Lloris, Mignolet, and I could go on. All those players were groomed by foreign clubs and leagues. However, a number of foreign players come from English clubs. The likes of Begovic, Mannone, Krul, and probably the best of them all, Szczesny (yeah, so what if I'm a biased Arsenal fan?) All of those players graduated from English clubs, yet not one of them is British, never mind English. This suggests that English clubs are plucking up the best talent wherever they can get it, especially at a younger age. Clubs don't seem to mind whether the academy players are coming from a local background, or from across a body of water. If clubs are picking up teenagers, that might explain why English goalkeepers are currently at a premium, especially considering how limited time can be for growing net-minders.

Let's take a look at a different stat. How do the ages of the goalkeepers match up when comparing England to other leagues? Why should we look at this? Well, if we are correct and English clubs are picking up the best talent, regardless of age, then we would expect clubs in England to skew younger than other leagues. Younger talent is far superior to an equally capable older player for a number of reasons. They are cheaper to acquire, yet are worth more if they pan out. Failures are also relatively inexpensive. Young keepers generally reach their peak far later than outfield players, so if a young keeper is playing at a high level at 23, he can be expected to be fantastic at 29. You can also keep a young player for far longer, reducing squad turnover.

Looking at the data, Germany actually has the youngest goalkeepers, both in average and median age. However, I suspect Germany is an outlier. The numbers in the Bundesliga are completely different than the other leagues, and have less diversity. In addition, the players without German nationality are almost all from nations that border the country, and even speak German. This suggests that these players are more likely local products, indicating that Germany as a whole is doing something different that is working. However, it could also simply be a matter of a generational shift. I don't know, and it doesn't really apply to what we are doing here today.

Excluding Germany, England does, in fact, have a slim lead in terms of having the youngest keepers. That would suggest that, the league is, indeed, picking the best players at a younger age. 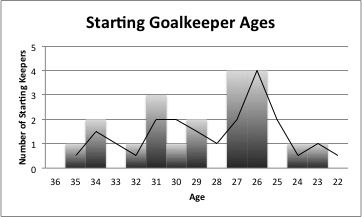 Looking at this chart, it becomes apparent that, while there are a number of older players (with Tim Howard being the oldest), there is more of a skew towards younger players (with De Gea being the youngest). The peak in England is also younger than in the other leagues (still excluding the Bundesliga). Spain, Italy, and the USA all have their peaks and plurality (if not majority) within the range of 28-32. In contrast, England is heavily based on 26-27 year olds. A younger peak implies better average players, who last longer. Going back to the question of English keeper availability, once again, the English keepers in the league fall in that 26-27 range. That would suggest that English production is dead center for the current Premier League generation. The line of succession would then depend on whether there is a high turnover rate (where keepers who are replaced are younger than keepers replaced in other leagues) or whether this is simply a generational quirk. If it is the former, than I expect new English blood to emerge well before new goalkeepers are needed.