Should Gareth Barry Be A Factor for the World Cup?

What the numbers tell us regarding Gareth Barry and the argument for his inclusion in this summer's showcase.

Share All sharing options for: Should Gareth Barry Be A Factor for the World Cup?

With just a few months left leading to the World Cup, England's head coach Roy Hodgson is probably busy pouring over pages in his dossier (I imagine he has one, a thick one). The early pages contain information about England's goalkeepers ("Joe Hart, nice hair"), and then defenders ("avoid discussing England's defenders on the tube"), then he gets to the part about the midfielders.

As currently constructed, the midfield area is probably one where The Three Lions have a lot of options to choose from. You have the oldies but goodies such as Frank Lampard, Steven Gerrard, and Michael Carrick, then the young lions such as Jack Wishere, Jordan Henderson, Tom Cleverley, and Ross Barkley . But perhaps, another name that Roy Hodgson should examine closely, is Gareth Barry. You may be wondering why a soon-to-be 33 years old player, who hasn't featured for England for nearly two years (his last England cap was in May 2012, in a pre-Euro 2012 friendly against Norway) should be considered for a call-up to Brazil. Considering in his last outing for England, he was taken off because of an injury, and the fact that Roy Hodgson has chosen to call-up numerous other central midfielders during that span, which indicates that Gareth Barry is well below the pecking order in England's midfield.

But this season, joining Everton from Manchester City on a season long loan, Gareth Barry's numbers show that perhaps he is deserving of another chance on national team duty. Comparing his numbers this season with players such as Steven Gerrard, Frank Lampard, and Michael Carrick, tells us that Gareth Barry is deserving of another England call-up.

These two tables provide us with more insights on Gareth Barry performance compared to his peers (data from squawka.com): 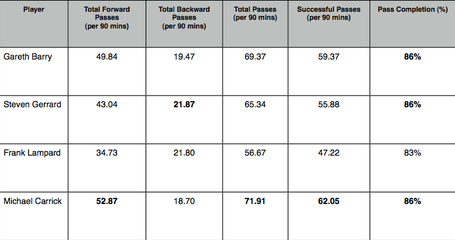 It shows us how Gareth Barry does a good job of passing the ball, thus helping his side in keeping possession, something that is strongly emphasized by current Everton manager Roberto Martinez. Furthermore, Barry is equally adept in passing it forward (his 947 forward passes is the most compared to Gerrard, Lampard, and Carrick), or backwards (his 307 backward passes is second to Gerrard). The number of total passes and passes completion is also comparable with Michael Carrick (who have played 377 minutes less compared to Gareth Barry), who tops most of the categories above.

The next table shows us the comparison between Barry and his peers in the defensive side of the game: 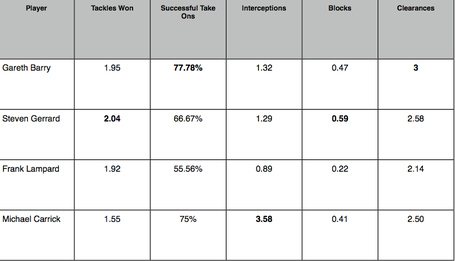 Defensively, Gareth Barry is pretty much what you expect in terms of a defensive midfielder, he won nearly two tackles a game (37 tackles won to Gerrard's 38 tackles won). Another nice side of his game is also how he is not afraid to take on the opponent, as evident by his leading successful take on percentage. When you factor out Carrick's godly interceptions, then Barry is the next best when it comes to breaking up the opposition's play. He is also well alert in clearing dangers, with a leading 3 clearances a game.

To sum up, Gareth Barry's game isn't exactly eye-catching, or spectacular, but what he does so well is that he passes the ball efficiently and keep possession for his side, while helping his team out defensively as well. While England is not short in dynamic box-to-box midfielder, it'd be hard to overlook Barry's number and performance this season especially as a defensive midfielder. Although it would comes to no surprise if Roy Hodgson stick with his group of midfielders that manages to send England to Brazil, echoing the sentiment of my fellow writer David Wyatt, about the importance of monopolizing possession in the World Cup, perhaps Roy Hodgson should reconsider calling Barry for another national team duty.