Questions That Need To Be Answered Before Brazil

England are heading to the World Cup without any hype, I can't remember the last time this happened and I'm actually excited about it. However there are some questions that we will need answers to before Brazil comes around.

Share All sharing options for: Questions That Need To Be Answered Before Brazil

Is Joe Hart truly going to be England's number one when push comes to shove? At the moment there is no indication that Joe Hart will be playing club football again any-time soon. Costel Pantilimon is performing to a high standard and Manchester City are winning, there is no reason to believe that Hart will be reclaiming his position. That being said he performed very well against Germany for England. However he had only just lost his place in the starting line-up, if he doesn't regain his position before the Summer, he'll have a lot more rust. With John Ruddy and Fraser Forster playing week in and week out for Norwich and Celtic respectively, it's hard to sell Joe Hart as the number one if he is not playing consistently.

If Joe Hart doesn't regain his spot, can he really play in Brazil?-England Fans)

Do you take Frank Lampard to to the World Cup? Frank will be 36 by the time the World Cup is in full flow in Brazil. The heat will be sweltering and the legs will get heavy very early. The chances of England doing anything at this World Cup are slim, so do we go with the old-guard for one final push or do we pull the curtain down on Frank's international career and instead give tournament experience to the future. I'm inclined to suggest that we should leave Frank at home and instead ensure that Ross Barkley and or Ravel Morrison get a run out in Brazil so they become accustomed to the tournament experience. 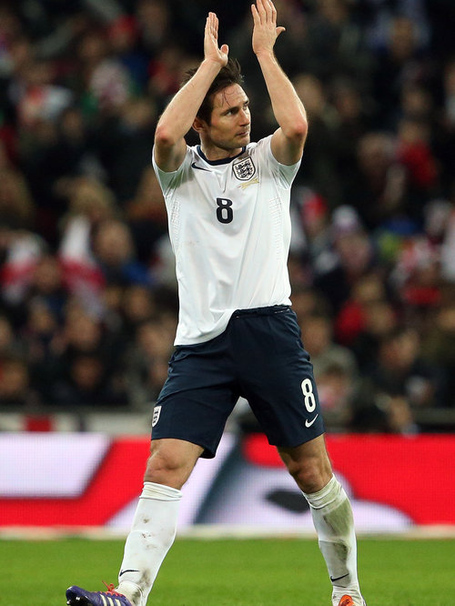 Who's playing out left? We seem to produce a lot of right midfielders, but when it comes to putting someone on the left we always stumble. I still remember Trevor Sinclair playing for England out wide in the 2002 World Cup, or Joe Cole playing out of position in left midfield in 2006. At the moment it seems as though Hodgson likes to place Welbeck out on the left and while it hasn't been disastrous, I don't think it's the full term answer. I wouldn't be against putting Ashley Cole at left back and then Leighton Baines at left midfield for a trial before the World Cup, maybe it wouldn't work but you just never know.

Where are the goals going to come from?-England Fans

We just have to get that midfield partnership right. I don't think England know their best midfield combination at the moment and we are running out of time to find out. For some reason, Tom Cleverley keeps getting minutes in centre midfield, and I can only imagine it's because he plays for United and or has some provocative images of Hodgson that he is blackmailing him with. Wilshere isn't playing central for Arsenal right now, and a midfield of Carrick and Gerrard wouldn't have the legs to propel England anywhere. A midfield of Barkley and Gerrard is too attacking, so where do we go from here? Part of me wishes that James Ward-Prowse and or Nathaniel Chalobah were further along in their development, as either player could hold that central role down.

Where are the goals going to come from? England were held without a single goal in their two most recent friendlies against Chile. We have to ask the question, who will fire England into the knockout stages of the World Cup. Sturridge is one of the hottest strikers in England right now, but when he plays for England he looks as though he is short on confidence. You can't play Rooney in that advanced role as he doesn't get involved enough, and his energy is wasted chasing lost causes rather than providing opportunities for his team-mates. Jay Rodriguez just didn't look good enough in the short spell he had. You know where I'm going, it's time to look to the youth again and bring in Saido Berahino to get tournament experience.

These are just some of the questions that we have to find an answer for before June rolls around. In just over a weeks time we'll know our opposition and the task at hand, but that won't even matter unless we can answer even half of the questions posed enough.