England Under 19's Top Group in Euro 2014 Qualifying Round

The England senior side secured a place in Brazil, the U21's secured top spot in their qualifying group and now the U19's come out on top.

Share All sharing options for: England Under 19's Top Group in Euro 2014 Qualifying Round

Who said English football was in trouble? as far as I can see we are performing as well as we have done in some time. Roy Hodgson's men have secured their place in the 2014 World Cup, Gareth Southgate's men are top of their qualifying group with two games in hand on their closest competitor, and now there is good news from the U19's.

Noel Blake, England U19 head coach has returned with his team from a week long qualifying round tournament in Slovenia. They do things a little different when it comes to qualifying for a major European championship.

At the start of the qualifying round, 52 teams were divided into 13 groups of four teams. Each group contested a mini-tournament that was held by one of the group members. The 13 winners of the groups, and the 13 runners up as well as the best third placed team advance to the elite round of qualifying. Hungary automatically qualified as the European Championships host next summer, and Spain received a bye into the elite qualifying round with the highest competitive coefficient.

The draw for the elite round will be held on November 28th, with seven teams progressing to the 2014 European Championships alongside hosts Hungary.

However back to the qualifying round that has just taken place. Back in December England were drawn into group 9 along with Switzerland, Slovenia and Andorra. The qualifying round was held between the 10th and 16th of October, with England topping the group to ensure they likely avoided the likes of Spain and Germany in the elite round, meaning the chances of progressing to the Championships a lot higher.

Here is a list of the England results from the past week:

Derby County striker Mason Bennett left Slovenia as England's top scorer, scoring three goals in as many games. It was an impressive performance by the "Young Lions" as they were asked to complete three games in the space of 5 days. That takes a lot of conditioning and a lot of hunger. Although they got off to a slow start against the tournament hosts in Slovenia, a thrashing of Andorra and a comfortable 1-0 win (although it had it's nervy moments at the end) against Switzerland will see them in the pot for the elite round qualifying.

Below you can view the squad that was in Slovenia for the qualifying round. 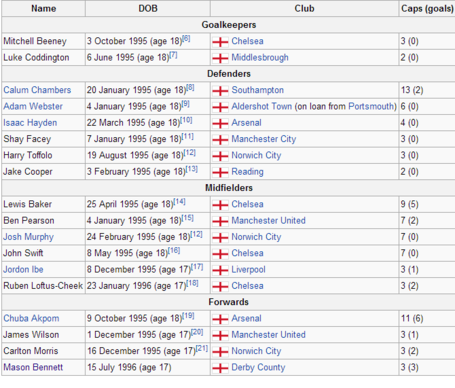